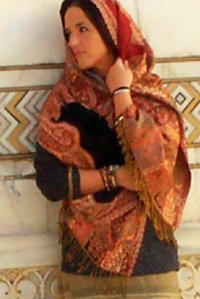 Leila A. Fortier is a writer, artist, poet, and photographer currently residing on the remote island of Okinawa Japan. Her poetry is known to be a unique hybrid form in which her words are specially crafted into abstract visual designs, often accompanied by her own multi-medium forms of art, photography, and spoken performance. Much of her work has been translated into French, Italian, Spanish, Arabic, German, Hindi and Japanese in a rapidly growing project to raise global unity and understanding through the cultural diversity of poetry and literature.

Her work in all its mediums has been published in a vast array of literary magazines, journals, and reviews both in print and online. She has appeared in several books, anthologies, and freelance publications. In 2007’ she initiated the anthology A World of Love: Voices for Carmen as a benefit against domestic violence and in 2010’ composed a photo book entitled Pappankalan, India: Through the Eyes of Children to benefit the education of impoverished Indian children. She is also the author of Metanoia’s Revelation through iUniverse.