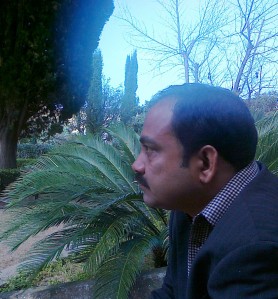 Sunandan Roy Chowdhury (b.1969) is a publisher, translator, poet and writer. He holds a PhD in education, with specialization in Indian higher education policy. He has studied history at Presidency College, Calcutta and at Jawaharlal Nehru University, New Delhi and is a regular lecturer on Asian Studies at Satakunta University, Finland.

Chowdhury has authored Campus Nation: Student Activism and Social Change in Slovenia, Poland, India and Bangladesh investigating student movements and change of regimes both in South Asia and East Europe (Worldview, Calcutta, 2006) and co-edited Islam and Tolerance in Wider Europe, (CEU Press, New York, 2006). Sunandan is a former fellow of Open Society Institute, Budapest. His articles have been published in various media including Mainstream (New Delhi), Ha’artez (Jerusalem), Dagens Nyheter (Stockholm), Mint (Mumbai) and in FT.com (website of Financial Times, London), and Matrubhumi, (Kozhikode). SAMPARK, the publishing house Sunandan Roy Chowdhury founded in 1999, is devoted to bringing out English and Indian language translations of literatures from all around the world. Sampark Journal of Global Understanding devotes each issue to the literature and thought world of a nation and 14 countries have been covered so far. The YOUNG SAMPARK imprint was launched in 2012 to publish children’s books in English and Indian languages.

Among Sunandan Roy Chowdhury’s translations into Bengali are ek skulmaster, tar stree o ek marxbadi, Norwegian writer Dag Solstad’s novel Genanse og verighet, and lal premer angti – finlander chhoto golpo, an anthology of short stories from Finland edited by Suna Onder, both published by SAMPARK. He is presently translating into English the poetry of Jibanananda Das, the most important Bengali poet after Rabindranath Tagore.
Sunandan Roy Chowdhury started writing poetry in 2009 mediated by a personal loss. He writes both in Bengali, the language of his heart and English, the language of his mind. Politics and philosophy find voice in his poetry and so does love.